Lunar Chronicles Wiki
Register
Don't have an account?
Sign In
Advertisement
in: Articles with spoilers, A to Z, Characters,
and 10 more
English

"At first, she was disgusted by him and his apparent greed and recklessness... [But] like the sun rising over Earth's horizon, her perception began to change. Carswell Thorne wasn't a heartless scoundrel at all. If anyone bothered to get to know him, they would see that he was compassionate and chivalrous. He was exactly the kind of hero Cress had been dreaming about her entire life."
―Cress' thoughts in Cress

around 22 years (in Something Old, Something New)

When Thorne was eight, he freed a rare Sumatran tiger from the Los Angeles Zoo. Thorne was on a field trip with his class at the time and he opened the cage. Thorne explained to the authorities that the tiger "looked sad locked up like that, and that he didn't regret it." At eleven, Thorne's parents filed a police report stating they had been robbed of a second-era diamond necklace that belonged to Thorne's mother. Thorne later sold the necklace on the net for 40,000 univs to a person in Brazil. However, he was too late in sending the necklace and was forced to return the payment, along with an apology. Thorne claimed that "he was only trying to raise money for a local charity offering android assistance to the elderly." At thirteen, Thorne was given a week-long school suspension after losing in a fight to three boys in his grade. Thorne said that "one of the boys had stolen a portscreen from a girl named Kate Fallow" and that he "had been trying to get it back." Later it was found that most of his claims were not true.

When Thorne turned seventeen, he was accepted into the American Republic military. When he was nineteen, he removed his ID chip, stole a spaceship, the Rampion, and deserted the military. Eighteen months later, Thorne was found and arrested in the Eastern Commonwealth. Although he was a criminal, many Earthen girls swooned and gossiped about Thorne, and he became a celebrity. Cress eventually fell for him when she was looking for Linh Cinder from her satellite. She explained how she felt like she had a certain connection to him and that he would be her hero. She too thought that he is very handsome.

On the 228th day of Thorne's captivity, Cinder drills a hole through his prison cell's ceiling. Cinder mutters that she is one room off. Thorne attempts to flirt with Cinder, but she repeatedly brushes him off and finds him more annoying than charming. She takes his vid-cable from his portscreen as hers is "on the fritz." Thorne offers to be her accomplice and mentions that he has a spaceship. As she drills another hole, Cinder unknowingly glamours Thorne into adoration and compliance by telling him to "stop talking" in thought. Cinder, needing a way out of New Beijing, takes Thorne with her on her escape in order to use his ship.

When they reach the hangar that holds his spaceship, they meet up with the owner of the hanger who seems to be good friends with Thorne, but will not help them because Cinder is a Lunar. Cinder glamours him until he blacks out and the two take off in Thorne's spaceship, nearly getting captured by the police. After being in space for a while, they land in Rieux, France in order to look for Michelle Benoit. Thorne believes that the Lunar princess is still alive, but Cinder does not tell him that she is Princess Selene yet, and is happy to help. When they reach Michelle Benoit's house, they find it ransacked and go into the room that Cinder is held in for eight years. Thorne shows obvious sympathy and horror at the sight of Cinder's mutilated three-year-old body, unaware he is looking at a younger Cinder.

Thorne and Cinder track down Scarlet Benoit and Wolf while trying to find Michelle Benoit. Cinder, needing a real pilot and more allies, accepts Scarlet and Wolf onto her ship. There are then four people on Thorne's ship (excluding Iko): Thorne, Cinder, Scarlet, and Wolf.

Thorne is seen as sarcastic, has a devious streak, and is egotistical. In the beginning of Cress, Cress had thought of him as "princely" and kind. That thought is later proved wrong, but he is within the range of kindness when it comes to Cress. Thorne can be seen as very flirtatious, winking, raising his eyebrows and smiling at almost every girl he sees. However, he can be very sweet, and is protective of his friends and especially of Cress.

Thorne is described by Cinder as "rather attractive" and having a "square-jaw, bright-blue-eyes, devilish-dimples." He is noted to have a bit of stubble when he was in prison, and when he was lost in the desert with Cress. On Twitter, Marissa Meyer confirmed that Thorne had brown hair.

Thorne and Cress first met via a comm. Cress was tongue-tied and self-conscious, worrying about her appearance. Thorne expressed bewilderment at her vast amount of hair, quoting; "Aces...is all that hair?" His first line is thought to have parodied Flynn Rider's bafflement at Rapunzel's hair in the Disney animation, Tangled; "Is this...hair?" They first met face-to-face in a podship, both of them tied up and gagged.

After crash-landing Cress's satellite in a desert, Cress and Thorne spend multiple days walking in the desert, and during that time they become closer to each other. Thorne helps Cress survive when they are in the desert, constantly easing her forward and protecting her when needed. At one point, Cress, half-delirious with fever and fatigue from the desert, proclaims her love for Thorne and moans sadly about how she is going to die without ever being kissed. Thorne promises that he won't let her die without being kissed. The two get rescued from the desert a little while later.

Cress then gets captured by Lunar traffickers who bring her to Dr. Erland in exchange for some money. Thorne finds out and heads after her, and the two eventually end up reuniting with each other and the rest of the crew. The whole group then carries out the plot to kidnap Prince Kai before his wedding can ensue. After they achieve this, they run into Sybil Mira. While they are battling thaumaturge Sybil Mira and her soldiers, Thorne kisses Cress, fulfilling his promise. At the end of Cress, Cress admits that she had a crush on Thorne even before they met, and Thorne tells her that he is not the good guy she believes he is.

In Winter, it is clear that they are both mutually attracted to each other, but Thorne still believes that he is not a good enough guy for her. In the end though, both of them end up confessing their love to each other. Thorne asks Cress to be on his crew, and she accepts.

Thorne first meets Cinder when she drops into his prison cell when attempting to break out of the New Beijing prison. At first, Cinder uses her glamour powers to make him shut up, but then she feels guilty and apologizes and eventually accepts his help to break out of prison. They break out together, fleeing from officials on Thorne's stolen ship, the Rampion. Thorne ends up becoming close friends with Cinder, even despite the fact that he annoys Cinder a lot. He flirts with Cinder a lot, but he is always joking.

Kate was his middle school crush. She was good at math while he was struggling. He pretended to like her, just to get her to do his math homework. It became a small crush but they never dated. She is possibly the first girl he ever liked for her personality more than her looks.

Thorne and Cress by © taratjah 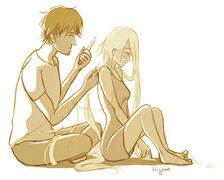 Thorne and Cress by © hizome 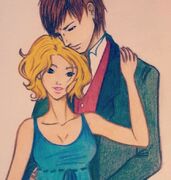 Cress and Thorne by © NightLizard