""Ideally, a lady will have three toys at once. One to romance her, one to bed her, and one to adorn her with very expensive jewelry."

―-To Levana, in Fairest

25 in Fairest at death years

Channary Blackburn (name Channary meaning "full moon", or "moon girl" in Khmer) was the queen of Luna, ruling in the years after her parents murder in 108 T.E. till her death in 112 T.E. She was the mother of Princess Selene Channary Jannali Blackburn.

In 108 T.E., Channary and her younger sister Levana's parents, Marrok and Jannali Blackburn were killed by a shell who infiltrated the royal palace. Channary didn't showed any emotions to the death. Three days after their funeral, Channary became the queen of Luna and she enacted the shell infanticide laws, stating that any Lunars born as shells are to be promptly "disposed of" in order to "protect the sanctity of their society." In reality, they were being kept in suspended animation while their blood was used to manufacture the letumosis antidote.

Channary died of regolith poisoning shortly after her daughter was born, at the age of 25. Her sister Levana suspected that it was because of her affairs in the outer sectors. Soon after her death, Levana inherited the Lunar throne as queen regent of Luna for thirteen years, for Princess Selene, Channary's daughter until she's older. But, Selene was reportedly killed in a nursery fire when she was three years old. However, Princess Selene survived and was sent to Earth, as the name of Linh Cinder. Levana had glamoured Selene's nanny into setting fire to the nursery and was widely believed to have killed the princess, but because of lack of evidence, no one could arrest her.

Just like Levana would come to be, Channary was cruel and cold, but whilst Levana was calculating, Channary was truly sadistic, as seen when she had her favorite seamstress's feet chopped off so she would have nothing better to do than to sit and make her fine dresses and when she forced Levana to throw herself into a fire when they were young children, when Levana was six and Channary was thirteen. This is the reason Levana refused to be seen without her glamour that hides her burn scars and the paralyzed left half of her face forever. She is described as insulting others so she can lift herself up in comparison by her sister, Levana. Channary is also well-known for speaking ill of her sister, Levana of her scarred face.

Channary seemed to have had very little interest in ruling and did not seem to care about the citizens of Luna, leaving the job mostly to her sister and councilors especially when she was pregnant with Selene. As a result, she would much rather spend her time going to parties, paying attention to her appearance, and soon became known for her promiscuity with both the higher and lower castes of Luna, which ultimately led her to become pregnant, but due to her extravagant love life, she remains unaware of who the father is.

Channary appeared to be somewhat manipulative, as shown in the beginning of Fairest where she told Levana to make a speech at their parents' funeral after slapping her, likely hinting that she probably didn't care for or hated her parents, and was sadistic and uncaring of her sister's and other people's feelings. In the beginning of Fairest, she stated that she wanted to be known as "the queen who never stopped laughing".

Despite this, she appeared to love Princess Selene (Cinder) a great deal, keeping her daughter's crib directly next to her bed and even choosing to feed Selene herself rather than having her servants do it for her. However, since she died soon after Selene's birth, her exact relationship with her daughter is unknown.

In the beginning of Fairest, Channary was described as remarkably beautiful, bearing lovely tanned skin and dark chestnut-brown hair that was apparently not a glamour, as Cinder has inherited these traits. She was noted to have eyes that tilt up at the corners, as though she was always smiling, which might have been part of her glamour.

Channary was not shown to have used her glamour or her gift excessively. Instead, she relied more on her negotiation skills, cunning, and natural beauty. She was quite skilled at convincing people to do things that she wanted them to without manipulating them bioelectrically. However, according to Levana she was naturally talented, "as I am. As you (Selene) are." At the age of thirteen, while still in the process of learning to use her gift, Channary had forced Levana, then six, to throw herself into a fire that Channary had set, then convinced their parents otherwise.

The two sisters had a complicated relationship of some sort - Despite Channary being the cause of the incident that damaged Levana both sisters didn't really show much hostility towards each other; rather, they acted passive and showed that they did not like the other's traits, thus they had very different personalities. Channary shamelessly abused her status as queen, which irritated Levana and Channary thought of Levana as a child and at times an idiot. She showed no embarrassment in showing her sadistic personality towards Levana, even when they were young. Channary was responsible for scarring Levana at a very young age by convincing her to position her arm above the fireplace. Also, Channary keeps calling Levana 'baby sister'

It was portrayed in Fairest that Channary's love for Selene was genuine in contrast to the other members of the Lunar royal family. Although Channary's lover and Selene's father was unconfirmed, she still loved Selene, and personally took care of her rather than the maids doing so, causing Levana to be intrigued by this side of her sister. However, the full extent of this relationship is unknown as Channary died shortly after Selene was born. 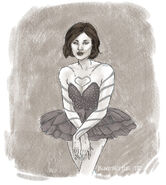 Channary Blackburn
Add a photo to this gallery

"Being Queen is a right, little sister. A right that comes with endless supplies of men and servants and beautiful dresses."
―To Levana, Fairest

"Come here baby sister. I want to show you something."
―To Levana, Fairest

"I was trying to save you."
―To Levana, Fairest

"Remember, baby sister? Remember how I came in here and found you playing with a real fire in the fireplace?"
―To Levana, Fairest

"I hope it's a boy. I am so sick of princesses."
―About her unborn child, Fairest

"Love is a conquest, love is a war. Here is what I think of love."
―To Levana, Fairest

Retrieved from "https://lunarchronicles.fandom.com/wiki/Channary_Blackburn?oldid=26381"
Community content is available under CC-BY-SA unless otherwise noted.