Brown with gray and emerald flecks

Evret Hayle was Queen Levana's late husband and Winter Hayle's father. His first wife was Solstice Hayle, who had died previously due to maternal death.

Evret was a royal guard in King Marrok's personal entourage when Levana was eight years old and she was obsessed with him since that time. (or what Levana thought was love.) Evret Hayle was also 12 years her senior. In the beginning of Fairest, Evret was 27 years old when Levana was 15. He was kind with Levana. He was married to and devoted to Solstice, a seamstress who died giving birth to their child. Levana manipulated Evret by taking on Solstice's appearance and making Evret wed her. He never loved her, but did care for her to some degree, and thought of Levana only as a friend. When Levana had revealed herself to Evret without glamour, he was shocked. Shortly afterward, Levana ordered the former head thaumaturge, Joshua Haddon, to stab Evret Hayle to death. Levana was deeply saddened by this, and killed the thaumaturge but she moved on quickly as to marry Prince Kaito of the Eastern Commonwealth to conquer Earth. As of this and her love life, she secretly promised herself that Evret Hayle would always be her only true love by always wearing her wedding ring.

Levana made a deal with former Head Thaumaturge Haddon: if Haddon would kill Evret, she would marry him and crown him king of Luna. But when Evret died, Levana betrayed him and stabbed the thaumaturge in the chest.

Evret was described by Levana as having dark brown skin, brown curly hair, and a muscled body. He had bright eyes with emerald and gray in his irises, like Winter.

Evret was a kind and polite man who was fully dedicated to his wife, Solstice Hayle (which was a rare thing on Luna). He attempted to resign from guard duties after Solstice died, but Channary refused to allow this. Evret was subsequently manipulated by Queen Levana who took on Solstice's appearance for the duration of her marriage to Evret. Although Evret did not love Levana, he presented her with gifts out of sympathy and protected her from Haddon the night he died. He loved his daughter, Winter, so much that his last words to Levana were "Promise, my Queen. Promise you'll take care of her."

Solstice Hayle was Evret's first wife and he loved her very much. Their love for each other as a couple was very well-supported by each other. Evret was distraught when Solstice died giving birth to their daughter, so much so that he decided to name their child "Winter", born on the winter solstice. He was protective of Solstice and was entirely devoted to her, never being tempted by Levana's ploys to foil their marriage. Levana was extremely jealous of her and her beauty.

Levana was Evret's second wife and had an extremely unhealthy, neglect-based obsession with Evret from a very young age. Evret noticed her feelings, however made sure to avoid the topic of romance when around her. Levana was aware of the fact that despite their age and status differences, she wanted to make a romantic relationship between them work at whatever cost. She was incredibly jealous when she heard of Evret's marriage with Solstice and saw to it that she would never be defeated by Solstice. In fact, she had been so engulfed in envy that she decided to imitate Solstice's appearance following her death, figuratively forcing Evret into marriage. Evret evidently pitied Levana, and felt manipulated in their marriage. Levana did trust Evret, however, as he was possibly the only Lunar she had ever shown her true appearance to. Because she knew Emperor Rikan would be a more advantageous match, Levana made a deal with the former Head Thaumaturge, Joshua Haddon, to kill Evret as long as she made Haddon her new husband. But when Haddon killed Evret, Levana became distraught, stabbing Haddon in the chest with a dagger and killing him. She deeply regretted her choice to have Evret assassinated, and despite her actions, Levana still honored her late husband by wearing her wedding ring.

Evret loved his daughter very much, and he had a blatantly better relationship with Winter than with Levana. Winter honored her father and knew him very well despite his early death. 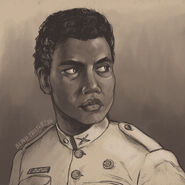 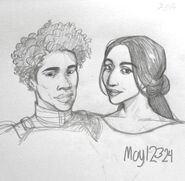 Evret and Solstice Hayle
Add a photo to this gallery
Retrieved from "https://lunarchronicles.fandom.com/wiki/Evret_Hayle?oldid=26136"
Community content is available under CC-BY-SA unless otherwise noted.