Lunar Chronicles Wiki
Register
Don't have an account?
Sign In
Advertisement
in: Citations needed, A to Z, Characters,
and 10 more
English

"Cinder: I can't believe this is happening. I can't fight like this, or start a revolution or be a queen. I can't do anything like this. I'm broken. I'm literally broken.

Iko: Yeah, but broken isn't the same as unfixable."

―Cinder and Iko in Winter

Iko is an android that belonged to the Linh family and the friend of Linh Cinder.

Iko had a glitch in her programming and would sometimes forget that she was an android, not a human. Despite that, Iko was believed to be female due to the fact that she loves shoes and has worn makeup and jewelry. Linh Adri had hoped to sell her parts, but no one would buy them. They ended up storing Iko in a box, but a young Cinder found the android and succeeded in rebuilding it. Iko was then fully charged as Cinder tried to gain recognition for fixing Iko. The recognition did not come, as the day Iko was fixed was also the day that Linh Garan fell ill to the letumosis plague. Linh Garan had stored the files for his bioelectricity invention in Iko before he passed. The files were known about by no one other than Cinder.[citation needed]

In the year 126 T.E., Iko comes back to Cinder's booth in the market with a new foot for her. Iko is one of two of Cinder's best friends, the other being Linh Peony her step sister, who is Cinder's only human friend. Iko is gushing about Prince Kai and is wearing Adri's pearl necklace with lipstick. Later on, Iko is taken apart by Adri and cannot be put back together in time for Cinder to escape her stepfamily. Cinder quickly recovers Iko's personality chip and tucks it into her calf compartment for safe-keeping.[citation needed]

When Captain Thorne and Cinder make a getaway through his ship, the Rampion, Cinder is forced to install her own auto control system, resulting in her blacking out. Later on, Iko's personality chip is inserted instead, resulting in a quick replacement for an auto control system. Iko is also responsible for helping take down two Lunar Special Operatives; injuring Jael when Cinder fights him and allowing her to temporarily control one of the Lunars.[citation needed]

When they are in the African Union, Thorne gets Iko a beautiful and realistic escort-droid body with blue hair and dark skin ― her main appearance now - and gives it to her as her new replacement body.[citation needed]

Due to Iko's faulty personality chip, Iko's emotions almost perfectly depict those of a human's. Iko having a heart of mechanized gold, is described to be extremely happy, sweet, and chipper. She has shown to be talkative and outgoing, which are unusual qualities of an android. She has an interest in fashion, specifically beauty - she and Cress enjoy conversing about that subject matter. She enjoys the idea of extravagant events, such as the annual ball held at the New Beijing Palace.

Iko is primarily made up of spare, disposable parts. However, Iko is able to take the appearance of a myriad of mechanical objects. For example, for a period of time Iko took the appearance of The Rampion. Now, Iko takes the appearance of an escort droid named Darla, with dark brown skin and different shades of blue in her braided hair. Adding onto her appearance, Iko later installs a new asset to her appearance - setting her eyes to change color along with her mood. As Marrisa describes it, it is hard to write an affirmed description of Iko, because she is an ever-evolving character.

Iko is Cinder's best friend, and typically acts as her confidante. She usually provides Cinder a realistic point of view or voice of reason when needed in serious situations. Internally, Iko is grateful for Cinder reassembling her using only broken parts. Externally, Iko does not need to affirm her gratitude to Cinder because her actions speak louder than words. Accordingly, Iko treats Cinder with much kindness and love.

Iko admires Prince Kai from afar and was initially a big fan of his before they first met. They share an easygoing relationship where Kai and Iko share friendly banter from time to time. Iko supports Kai and Cinder's relationship to the fullest extent and wants the both of them to be happy.

Cress and Iko get along smoothly as friends. They share similar interests and personalities, which make their friendship all the more straightforward. They both have an interest in fashion, as shown in Cress when Iko's personality chip was embedded in The Rampion and she pulled out a fashion blog for the both of them to read. 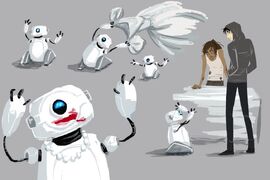 by © Unknown
Español
Community content is available under CC-BY-SA unless otherwise noted.
Advertisement