Royal guard
Jacin Clay is one of the protagonists in The Lunar Chronicles.

Jacin was formerly one of the palace guards of the Luna royal family. He worked for Sybil Mira and Princess Winter. Garrison Clay, Jacin's dad was very good friends with Evret Hayle, Winter's father. Jacin grew up with Winter and they became best friends later on.

Jacin first appears in Chapter 12, p.108 of the book Cinder.

In Cinder, Jacin appears briefly as one of Queen Levana's guards. Upon the queen's orders to take Linh Cinder captive to return her to Luna, he grasps Cinder's wrists and pins them behind her. When Kai tries to stop this by grabbing Cinder's elbow and tugging her to him, Jacin does not loosen his grip and he pulls Cinder again, plastering her against him. Through his chest against her head, he then uses bioelectricity humming inside him to control her, resulting in steady and growing warmth building in Cinder's spine that can cause a meltdown.

When Cinder tries to convince Kai not to bargain for her life, the queen orders Cinder to be silenced. Jacin clamps a hand over her mouth, pulling her hard against his chest. When the queen shatters the glass in her hand, sending crystal cascading to the floor, everyone jumps and screams, but Jacin stays calm and appears immune to the outburst of the queen. Every time Cinder collapses and slumps against him, he jerks her back upright. Jacin only pulls away when the queen flexes her fingers, causing Cinder to almost topple forward. Through bioelectricity manipulation the queen then makes Cinder snatch Jacin's gun from his holster and lift it to her head.

After Cinder tries to kill the queen and escape the palace, Jacin is the first person to run after her. He reaches the stairs and freezes when he sees Cinder sprawled on her side on one of the steps. When the queen arrives, she orders Jacin to kill Cinder. He descends a single step toward Cinder, holding the gun that Cinder drops, but is stopped by Kai who threatens the queen to never agree to any alliance with Luna if she kills Cinder.

In Cress, it is revealed that despite Jacin being one of the queen's guards, he is only loyal to his princess. Cinder thinks that meant her, but his princess later is discovered to be Winter. Winter later confirms this to Scarlet when she states she has only ever had two friends: a girl who turned to ashes (Princess Selene) and Jacin. In fact, she becomes very upset when Scarlet mentions that he could be dead.

When told of a device that can possibly alleviate a Lunar of the madness that comes with not using their gift for a long time, Jacin seems excited, believing this device can save his princess Winter. It is mentioned that Jacin desires to be a doctor as opposed to a Lunar guard, possibly revealing a softer side to his rather stoic and cold nature.

At the end of Cress, it is questionable whether or not he truly betrayed Cinder and the others, as even Levana was suspicious of his true intentions. In Winter it is confirmed that he indeed does betray Cinder, but only so that he can go home to his princess, Winter, to protect her from Levana, knowing that Levana despises her stepdaughter.

Jacin is considered to be very cold and obedient in the first three books, shown by his obedience to Levana, as well as his betrayal of Cinder. However in Winter a softer side of him is shown when he is in contact with Princess Winter. He is very protective of the ones he loves, and will do anything for them. He betrayed Cinder to get home to Winter, faked Winter's death to spare his parent's lives' as well as Winter's after Levana orders him to kill Winter. Jacin can be very sweet at times, like when he helps Winter through her hallucinations, and holds her, comforting her until she is better. He is also very sarcastic, though he tones it down around Winter.

Jacin appears to possess some traits of competence when using his bioelectricity manipulations, however he shows to not be nearly as skilled as Cinder or the Lunar thaumaturges. Nevertheless, Jacin's athletic ability compensates for where he is skilfully lacking in terms of his Lunar abilities.

Jacin is not shown to be close to very many in the series. He has not particular love for or loyalty to Cinder, nor to any of the other characters, except for a few. However, he is in love with Winter, and will do anything for her.

Jacin saves her life in Winter after she is found by Winter, and then hidden by her. He keeps her in his rooms' to avoid detection. Though initially it is dubious whether this is because Winter asked him to, or he actually wanted to, in the end he does do whatever it takes to take care of Cress. He even tells her that her safety will come second to only Winter's for him.

He shows no particular love nor loyalty towards Cinder in general, though they do create a somewhat amicable relationship in Cress when she vouches for him. In the first two books, he was Levana's guard and did whatever it took to capture Cinder on Levana's orders; however, in the fourth book, he decides to side with Cinder, though more because defeating Levana saves Winter's life, since Levana declared that she wanted Jacin to kill Winter, rather than because he is loyal to Cinder.

Jacin is in love with Winter. In Cress, at the end, he betrays Cinder and the crew, though later on he tells Winter that it is because he wanted to get home to her, to protect her. It is stated in Winter and Fairest that Evret, Winter's father, and Jacin's father were both best friends in the Guard, and that Jacin and Winter are childhood friends. He says when she was eight and he was ten they almost kissed, but she turned her head and told him only when they were married. Jacin is also one of the only people that is actually able to stop Winter from having one of her hallucinations and make them go away. He is deeply devoted to Winter, as well as in love with her. When he is assigned to be her personal guard, both struggle to keep their feelings hidden, resulting in an adorable and exasperating dance between the two. When Jacin is about to cave in from his statuesque noble guard position but then doesn't, it leaves Winter more and more heartbroken. When Levana threatens to kill his family if he doesn't kill Winter, he risks their lives to fake her death and help her escape. After she confesses her love for him in the menagerie, they kiss, and Jacin kills Ryu in order to make it look like she died. They are separated once again and Levana ends up infecting Winter with letumosis. Jacin finds the cure and heals Winter, and promises never to leave her side again. When they are confronted by the head thaumaturge, Aimery, who had proposed to Winter only to be declined, he asked why she had chosen an inferior guard over him. Winter says, "You don't understand. He is the only thing that is real." In the end when Winter suffers from mental damage from using her Lunar gift to kill Aimery after so long of not using it, Jacin stays by her bedside, telling her that he loves her, until she awakens and then, even when she doesn't remember him, he promises to stay with her. At the end of Winter, she regains her memory and remembers him. When she is healed and wants to be the first to try the device that could heal Lunar sickness, she tells him that she knows she is broken, and he protests with the words: "You're perfect." 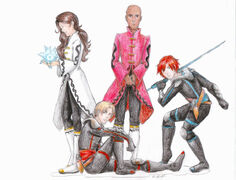 Sybil, Jacin, Aimery and Jerrico by © Abbi Whozit
Add a photo to this gallery

Retrieved from "https://lunarchronicles.fandom.com/wiki/Jacin_Clay?oldid=21257"
Community content is available under CC-BY-SA unless otherwise noted.