Lunar Chronicles Wiki
Register
Don't have an account?
Sign In
Advertisement
in: Articles with spoilers, Citations needed, A to Z,
and 12 more
English

Kaito, known as Kai, is one of the protagonists in The Lunar Chronicles. He is currently the emperor of the Eastern Commonwealth.

Throughout his life, Kai had been eager to take on the role of becoming emperor of the Eastern Commonwealth. He is studious, dedicated, and focused. Unfortunately, Kai's mother died of Letumosis when he was younger. His father, Rikan, who died of letumosis at the beginning of Cinder, was the previous emperor.[citation needed]

In Fairest, Kai is mentioned by Channary to be a possibility of marriage to Selene. Later, at age ten, he is seen with his dad and Konn Torin at a press conference, mourning the death of his mother.[citation needed]

Kai was the Crown Prince of the Eastern Commonwealth. After his father, Emperor Rikan, passed away due to Letumosis, Kai became the Commonwealth's new emperor. Kai's mother had also passed away from the same disease.[citation needed]

Kai first meets Linh Cinder when he enters her booth at the marketplace at New Beijing Market, in the disguise of a gray hoodie to avoid paparazzi, to have his broken android, Nainsi, fixed. He then meets her again with Dr. Erland under the impression of her fixing a med-droid. Due to their connection with Dr. Erland, they meet up several times. Kai slowly begins to develop feelings for Cinder, asking her to the ball several times, even gifting her beautiful gloves. However, since Cinder thinks her status as a cyborg and Lunar makes her unfit for Kai, she repeatedly turns him down by making up random excuses. Like Cinder, Kai faces decisions that can result in sacrificing his own life for what he perceives as the greater good.

Once Cinder learns that if Kai accepts Queen Levana's offer of marriage, she will kill him right after the wedding and coronation, Cinder goes to the ball to warn Kai. Levana sees her there and recognizes her as her glamour is similar to her mother's (Levana's late sister, Queen Channary). Kai & the world learns that Cinder is a Lunar and cyborg, and Cinder is thrown into New Beijing Prison. Kai seems to be extremely distressed by this as he actually likes her and feels betrayed, for he does not know if his feelings for Cinder are just her messing with his mind or real. In order to keep peace with Luna and Levana as harboring a Lunar fugitive is against the law, Kai agrees to hand over Cinder for a "trial," in which she is to be executed. When Cinder escapes, Queen Levana is quick to blame Kai because of his feelings for her.

Levana gives him three days to find Cinder. Kai is unable to do so and Levana attacked, unleashing Lunar Special Operatives that she sneaks on Earth. As a result, 16,000 Earthens are killed. Kai then agrees to marry Levana in order to stop the attacks.

Kai accepts Levana's marriage proposal, though it is evident that Kai still has feelings for Cinder. In fact, almost every time he thinks about her, he wishes she could escape. When Kai is planning his wedding with Levana, he treats it more like he's going to his death as he becomes tired of the wedding preparations. On the day of the wedding, he is reunited with Cinder. Their conversation leads into an argument and results in Cinder shooting him with a tranquilizer dart. Kai then wakes up aboard the Rampion - confused, hurt and shocked. Cress leads Kai into the podship dock where Cinder was repairing Iko. After the two argue, Cinder finally admits that she is Princess Selene. Kai then asks Cinder to tell him all of her secrets, from her synthetic eyes to her retina display. She apologizes to him and vice versa. The two share a kiss, but are interrupted when news of a massacre in Farafrah appears on Cinder's netscreen.

Kai is completely out of his element while aboard the Rampion. He learns the terminology, eats the bland food and wears the same uniform as the others. He and Cinder begin their new relationship, having conversations and sharing many kisses (18 in total). Although they find happiness in their relationship, it still has its flaws. He marries Levana and crowns her as empress of the Commonwealth. However, Levana is then killed by Cinder. Kai goes back to the Commonwealth, but still maintains his relationship with Cinder. He asks her if she would ever consider being an empress given her lack of desire for the throne, though she she says she "would consider it. Someday."

Emperor Kaito can be seen opening the first bioelectrical security system device facility in the Eastern Commonwealth in New Beijing. He also announces that he received the implant of the device to the media. During the private tour for him and Lunar ambassadors, Winter & Jacin, he shares his frustrations about how some Earthens are still under the impression that Cinder manipulated him into trusting her and having feelings for her. They also discuss the reports by Iko as well as how Cinder is doing, before meeting with Dr. Loi. Dr. Loi is one of the researchers who have been studying the notes of the device from the beginning and has discovered something about the program that created Iko and thought that Iko might want to have a look at it.

Kai has black hair with bangs that always seem to hang unkempt across his brow or in his eyes. He has startlingly copper brown eyes and was described to be quite tall, having to bend down a good bit to be at eye level with Cinder, the first time they met. He wears very formal clothes like suits, silks, dress shirts, etc., although he would rather wear jeans & T-shirts. In Winter, his hair is longer and messier. Kai is known to be handsome; according to Iko, Peony, Pearl and about every female in the Commonwealth - Kai is the man of their dreams.

Kai is perceived to be kind and always having his heart in the right place. Despite this, due to his position as a world leader at such a young age, he often comes off as naive and irresponsible to those close to him, especially his head advisor, Konn Torin. He is very inquisitive, often asking series of questions in a rapid manner. Being the emperor of the Commonwealth, Kai always places the welfare of his country and citizens before his own, to the point of willing to risk his own life and happiness in order to stop the special operative attacks on Earth and acquire the Letumosis antidote. He also possesses strong leadership skills and gives a confident and self-assured vibe even in times of chaos. He is rather sarcastic, especially when in a bad mood. He can get angry very quickly, but is capable of self-control and overriding his impulses.

Kai is skilled in ballroom dancing as he expertly guided Levana & Cinder across the floor at the ball. Kai also has excellent leadership and speaking skills, having taught himself to write and give speeches at a very young age, although he says in Winter that being aboard the Rampion made him realize that he has no practical skills whatsoever besides talking, which is only useful in politics.

Kai and Cinder first meet on professional grounds. With Cinder being the best mechanic in the city, Kai confides in Cinder to fix his android, Nainsi. They surprisingly get along and Kai notes that Cinder is a very capable and charming girl who is easy to converse with. Kai soon acknowledges that Cinder is in touch with Dr. Erland, so they encounter each other far more often. Kai gets to know Cinder better and starts having feelings for her. He tries to convey his feelings by attempting to ask her out to the annual ball, but Cinder declines his offers due to the fact that she is secretly Lunar and cyborg. After much turmoil, Kai hopes that his wedding with Levana Blackburn is stopped by Cinder as he truly does not harbor any feelings for Levana compared to those he has for Cinder. Fortunately for him, Cinder crashes their wedding and Kai wakes up from his unconscious state on the Rampion. Cinder reveals that she is Princess Selene and Kai is shocked, but genuinely interested in knowing all about Cinder. In Winter, Kai and Cinder officially commence their relationship. By the end of the series, Kai proposes to Cinder and she becomes his fiancée.

As part of Levana's plan to rule the Eastern Commonwealth, she schemed to marry Kai. Levana was commanding of Kai, but nevertheless tried to get along with him in order to make their marriage work. Kai was reluctant of this as he was blatantly unhappy with marrying Levana. In Cress, Kai accepted Levana's marriage proposal but hoped that Cinder would stop their wedding, or that he could escape. He did escape, albeit taken by Cinder upon the Rampion. He looked at Levana as an enemy and was determined to bring her down with the rest of Cinder's group.

Kai and Cinder by © Taratjah

Cinder and Kai by © ArtofAngela 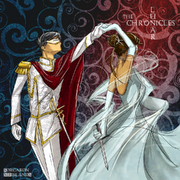 Kai and Cinder by © sorcaron 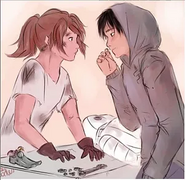