Student
Linh Peony was Linh Cinder's younger adoptive sister, who loved her very much. However, she died when she contracted Letumosis and Cinder later felt guilt over her passing as she saw Peony as her little sister.

When Cinder first arrived in the Linh home, Peony was kind and wanted to play with her. She was too young to understand why her mother, Adri, and older sister, Pearl, did not like Cinder.

Peony, like most of the girls of the Eastern Commonwealth, became a huge fan of Prince Kai; she was very vocal about her admiration and the latest gossips about the prince became a common conversational topic, much to Cinder's amusement.

Peony, alongside her family, were invited to the annual ball of the Eastern Commonwealth, with both her & Pearl having gotten new dresses. Their hover hadn't been working for some time, so Cinder was demanded to fix it before the ball; after knowing where her stepsister was going in order to gather material, Peony was curious and insisted on tagging along. Cinder later made Prince Kai promise to dance with her. However, Peony caught Letumosis, otherwise known as Blue Fever or the plague — the same disease that had killed their father, Garan.

An antidote was received from Queen Levana, who possessed the antidote prior to the plague outbreaks, but gave it to Earth only after Emperor Rikan died. Dr. Erland then gave the antidote to Cinder, as he had promised earlier. Cinder brought the antidote to Peony, trying to encourage her by telling her that she had secured a promise from the prince himself, that he would dance with Peony when she got better, but Peony was too weak to drink it and she died in Cinder's arms.

The med-droids then attempted to steal her ID chip to give to illegal Lunar Special Operatives.

Cinder managed to her ID chip, keeping it as a reminder of her sister, until it caused her discovery as a fugitive in Rieux, France.[1][2]

Peony's ashes were revealed to be kept in a cremation urn painted with peony flowers in the Linh apartment.[3]

The urn is tipped over and the ashes are scattered when the mutant soldiers kidnap Adri & Pearl.

Kai gives Cinder a locket with Peony's ID chip inside at the Weeping Willows Cemetery, telling Cinder that "she's not gone as long as you remember her." Iko discovers that she was programmed by Garan to be a playmate for Peony as she gave her father a list of attributes that she wanted in a friend and her father fulfilled those traits in Iko.

Peony was pretty with "dark curly hair," and a curvaceous figure. She was described as angelic with a "heart-shaped" face.

Peony was a very close friend of Cinder. Out of everyone in the Linh household, Peony was the most sympathetic and tried her best to help those close to her in any way possible. She had a liking of formal events, such as the annual ball at the palace. 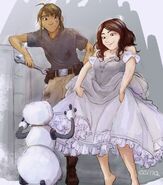 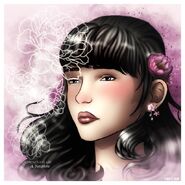 Add a photo to this gallery

Retrieved from "https://lunarchronicles.fandom.com/wiki/Linh_Peony?oldid=27383"
Community content is available under CC-BY-SA unless otherwise noted.