Luna is a country founded on the moon. Its capital city is Artemisia.

Centuries prior to World War IV, the moon was colonized by a small group of researchers from many different countries to further space research and exploration. After sixty years, the colony was recognized as its own country: Luna, a republic but not for long.

A lunar by the name of Cyprus Blackburn's DNA was damaged by prolonged exposure to ionizing radiation from cosmic rays. This DNA damage developed into what is known as the Lunar gene, enabling him to output and control bioelectricity to implant thoughts into other people's minds.

Blackburn used this power later to turn the Republic of Luna into a monarchy, crowning himself as king.

King Cyprus Blackburn was the first Lunar monarch, and his descendants inherited his mutated genetics: the Lunar gift. Many generations later, King Marrok and Queen Jannali were assassinated by a shell. Princess Channary assumed the throne, though she wasn't that dedicated to being queen. After she passed, her younger sister Princess Levana became queen.

Queen Levana ruled Luna, abusing those in the outer sectors and being harsh on anyone who she saw as breaking the law. Her niece, Channary's only child Selene Blackburn, was caught in a tragic fire that was planned by Levana and was thought to have killed her.

All Lunar cities are housed beneath a series of interconnected paraterraformed domes. The domes are made out of regolith, a substance found in abundance on the moon, that has been fused into a thick glass-like substance. The majority of the city's buildings made of cast regolith, giving them a matte black finish. Other natural building materials include basalt rock, titanium, and silicon. Beyond the domes, the sky is always black and stars are always visible. Earth can also be seen from those domes on the Earth-facing side of Luna, and it is sixty times brighter and four times larger than the Moon appears from Earth.

One Lunar day and night lasts about twenty-eight Earthen days—what is seen as one moon cycle, from full moon to full moon. Lunars designed the domes to go opaque during the long days or produce artificial sunlight during the long nights in order to simulate Earth's day-and-night patterns. Energy is derived from solar power collection stations around the "peak of eternal light," or the rim of the Peary crater. They are linked on a grid and transferred to the city. Water is available as perpetually frozen ice in nearby continuously-shaded craters.

There is also a glass bridge jutting out from the palace. Queen Levana uses it to see over her soldiers.

Luna's capital city, Artemisia, is located on the Earth-facing side of the moon near the North Pole at the edge of Mare Frigoris, or the Cold Sea. It is the hub of government activity and the home of the Lunar royal family and other aristocrats. Other outlying domes serve distinct purposes and were designed with different industries in mind, including regolith mining and processing, goods manufacturing, and agriculture.

Videos and messages from the royal family and high courts are broadcast from the walls of the domes and screens along the underground subway systems. These are on a closed circuit and controlled entirely by the government—lower-class Lunars do not have access to news or information from Earth or communication with other sectors.[1]

Luna is split into biodomes that are each different sectors with purposes and populaces. The sectors are abbreviated by two letters, a dash, and a number. There are at least 87 different sectors

The Research and Development sectors, according to Ze'ev Kesley(A.K.A Wolf), supported Queen Levana.

The following sectors were not given names in the books. and were part of the resistance:

Luna is the first place to have the Lunar mutation that allows its citizens to manipulate another human's bioelectricity. Not only is this ability part of the royal bloodline, but has also spread to other citizens due to Luna's culture which is not monogamous.

Though couples may get married, on Luna it is common for them to be disloyal to one another. If a couple stays together, it is rare, though not nonexistent.

Many of Luna's citizens also use their glamour to make themselves into an appearance they like and can change something simple, like the color of their shoes, or change their entire appearance. Emotion manipulation and forcing someone's will are also common, and murders sometimes take place, someone forcing someone else's will with their glamour.

Lunars also tend to exclude other Lunars who do not have a Lunar gift and cannot be manipulated, calling them shells. The aristocrats of Luna also are known to manipulate people without strong glamours to get a laugh or two.

Because of this, Lunars are often seen as cruel and frightening by Earthens. 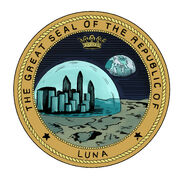 Lunar Seal © Annie
Add a photo to this gallery