Lunar Chronicles Wiki
Register
Don't have an account?
Sign In
Advertisement
in: Citations needed, A to Z, Characters,
and 11 more
English

Brown, messy and sticking in all directions

Soldier in Lunar military (former)
Ze'ev "Z" Kesley, also known as Wolf, is one of the main characters in the Lunar Chronicles. He was a former special operative in the Lunar army.

Ze'ev was drafted at twelve years old to be genetically-modified and trained for Queen Levana's army. He was not allowed any contact with his biological family, although his younger brother, Ran, joined his pack eighteen months later. His pack's thaumaturge was Jael.[citation needed]

Five years later, Ze'ev became alpha of his pack after killing the former Alpha, Brock, in a combat showcase in honor of Queen Levana's visit. His impressive showcase battle prevented him and his pack from being further modified into their more beastly counterparts. Wolf is a major part of the Lunar Chronicles.[citation needed]

Ze'ev is first introduced as Wolf by Scarlet's friend Émilie Monfort as a "shy street fighter" and a regular at Rieux Tavern, and she swoons over him. Scarlet suspects Wolf after seeing a tattoo that her father had said is on the people who kidnapped him and her missing grandmother. Scarlet decides to bring Wolf with her to search for her grandmother.[citation needed]

Later on, Scarlet discovers that Wolf is not what he had told her, a "Loyal Soldier to the Order of the Pack" (judged from his LSOP0962 tattoo), but actually a genetically-modified Lunar named Ze'ev Kelsey, who was a Lunar Special Operative.[citation needed]

After Ran kills and seemingly eats, Scarlet's grandmother, Ran chases Scarlet and eventually catches her, throwing her against a statue. At that moment, Wolf comes in and begins fighting with Ran to protect Scarlet, eventually killing Ran. Scarlet runs away, weak and injured but still believing Wolf to be on her side. Cinder mistakes him for a crazed Lunar trying to kill Scarlet, and shoots him with a tranquilizer dart, leaving him unconscious.[citation needed]

Wolf is brought onto Carswell Thorne's ship by Scarlet, which Linh Cinder is also on. When Scarlet and Wolf are alone together, he tells Scarlet that he will protect her, no matter what the cost. Scarlet decides to forgive him and says that she can be his "alpha female," which he likes.[citation needed]

Wolf became devastated when Scarlet was captured by Sybil Mira and taken to Luna. He did not want to eat, fight, or do anything until they get Scarlet back.[1]

While in the process finds his mother who gets killed, then meets Winter, and eventually finds Scarlet. When he finds her he kisses her, and stays with her. Later on in the story he gets captured, and turned into one of the Queen's guards again. He eventually finds his way back to Scarlet, and the rest of the group. In the end he agrees to go back to France with Scarlet.[2]

Wolf was primarily portrayed as ambiguous, as it was hard for even Scarlet to trust him due to his unusual descent. At the beginning, Wolf showed little confidence in himself, seconding Scarlet's worries and did not force his views onto her. Later in the series, Wolf soon becomes more warm around people, additionally showing compassion. Wolf is willing to protect the ones that he is close with; he affirms that he is truly devoted to his group.

Wolf is 6'4" and very muscular. According to Cress, he has messy brown hair that tends to spike in all directions and refuses to be tamed. Wolf has an array of scars on his olive skin. His eyes are an unnatural green, like sour grapes on a vine. He is usually in loose gray pants, plain t-shirts or tanks, and tries to be barefoot whenever possible. Wolf has a tattoo that reads 'LSOP962' on his left forearm, and sharp canine teeth that he tries to hide.

Scarlet and Wolf by taratjah

Wolf and Scarlet by © Blindthistle 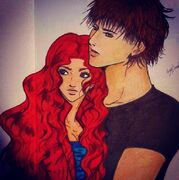 Scarlet and Wolf by © NightLizard
Español
Community content is available under CC-BY-SA unless otherwise noted.
Advertisement